Things to do in Fermo: an old hamlet to be discovered 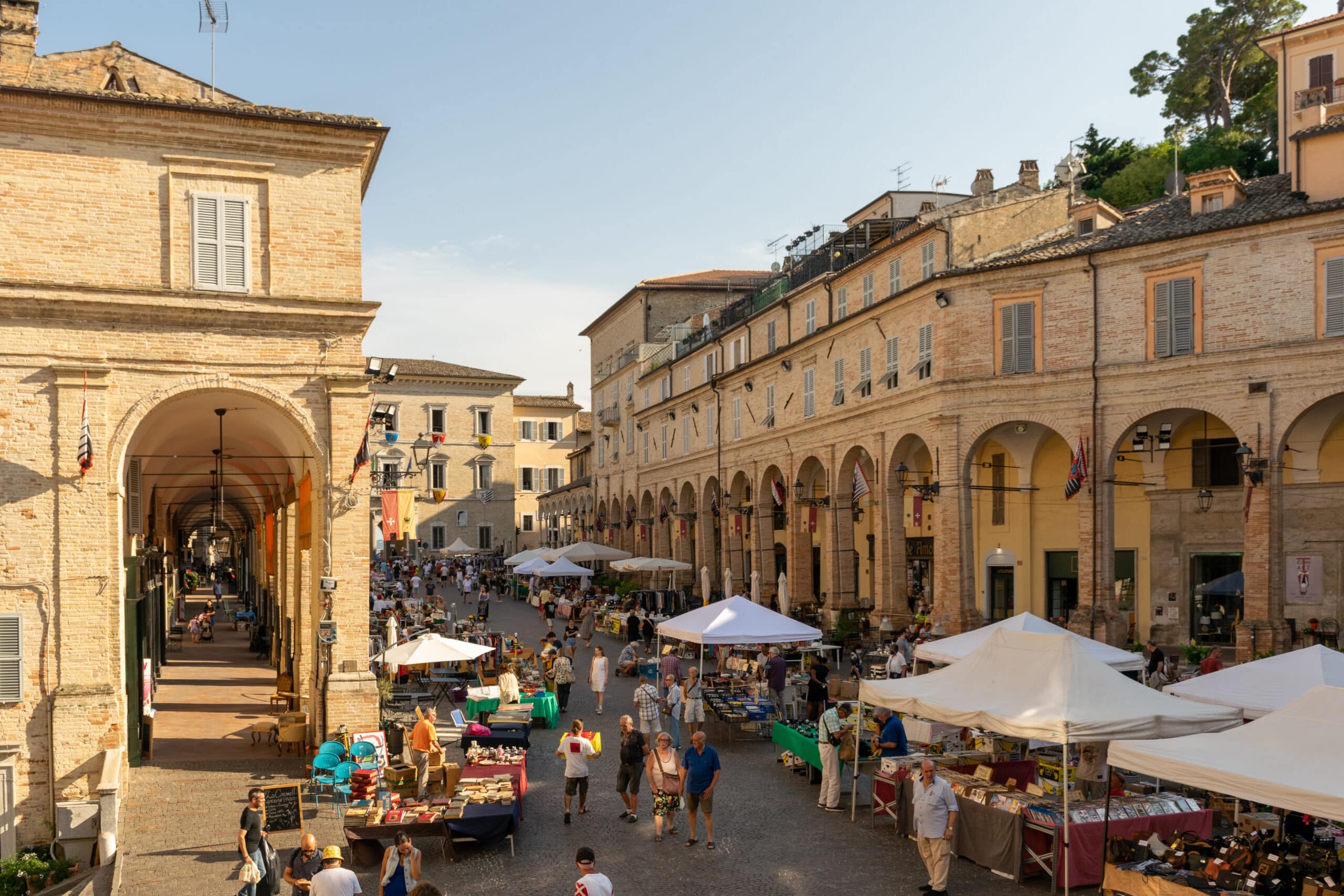 Fermo is the capital of the Italian province of Fermo and is located in the south of Le Marche. The typical medieval town is nestled between the Adriatic Sea and the Monti Sibillini. We had often heard from our guests that a visit to the summer market on Thursday in Fermo is part of their regular trips when they are on holiday in Le Marche. So now we wanted to see for ourselves, and it’s definitely worth it!

We went around four o’clock, but you can of course also combine it with a day at the beach in the morning (check out Il Lido di Fermo or Porto San Giorgio). You can buy entrance tickets at the information centre on Piazza del Popolo which opens at 15:00. We therefore recommend going in the early afternoon to be able to visit all the sights.

In the atmospheric town every Thursday evening in July and August (from 5 p.m. to 1 a.m.) you will find the Mostra Mercato dell’Antiquariato ed Artigianato, an antique and collectors market. It is a nice mix of antiques, curiosities and second-hand items. 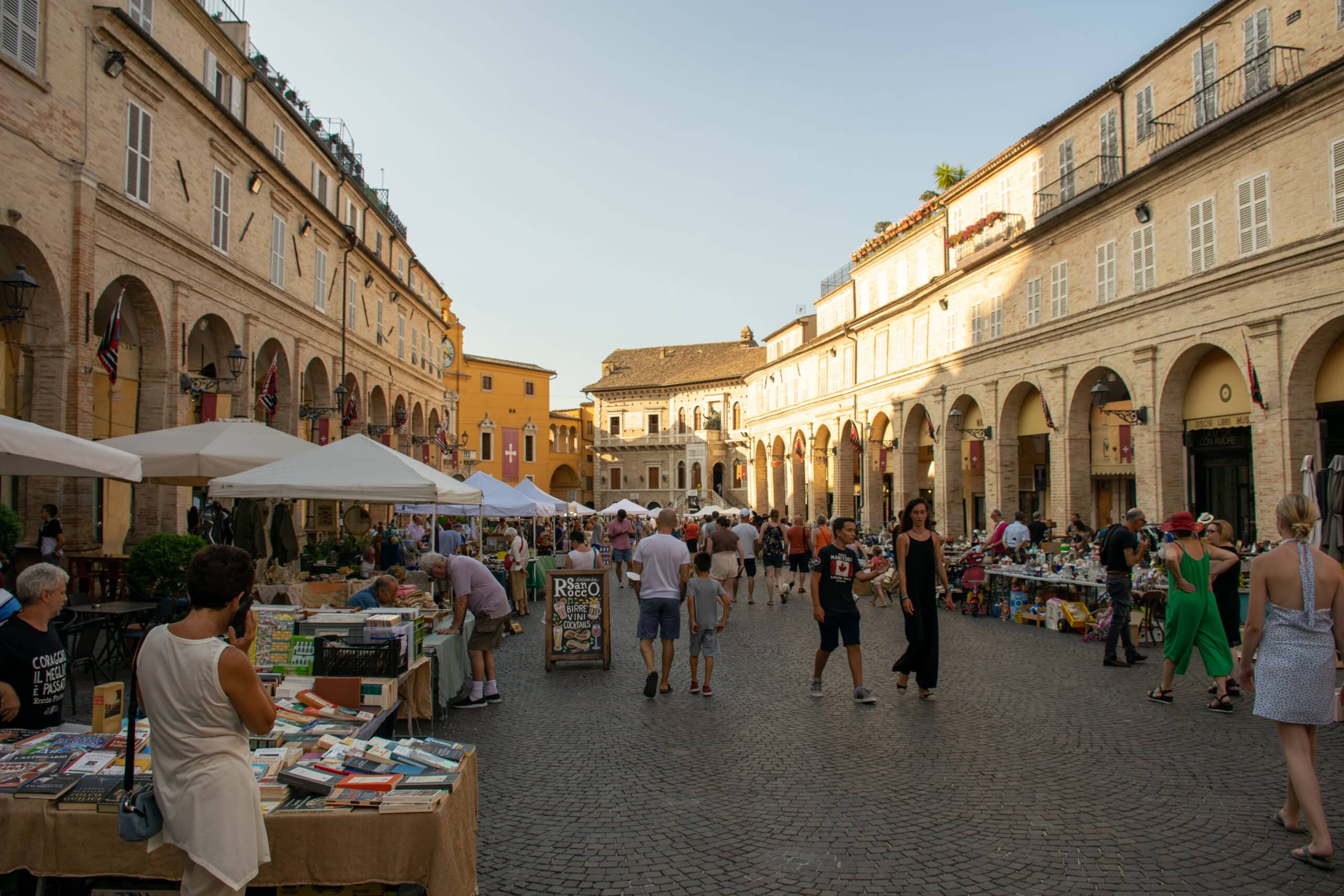 What to see in Fermo 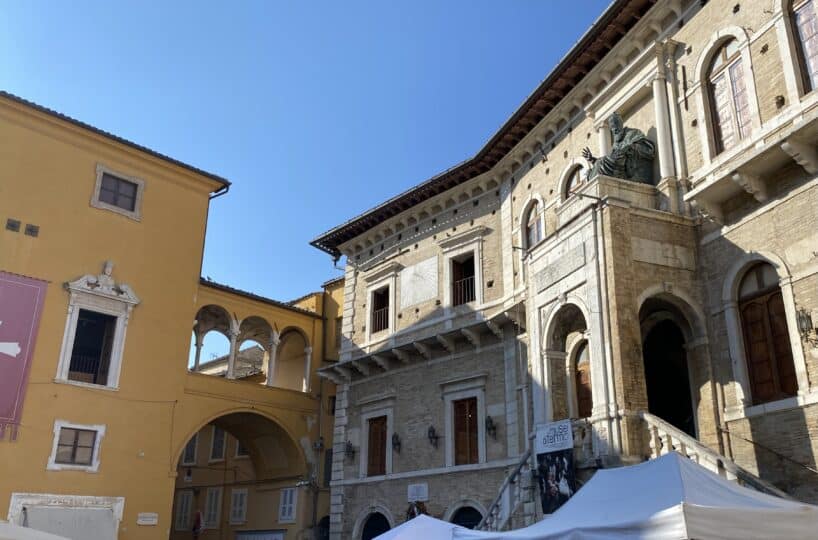 On the elongated and elegant Piazza del Popolo you will find many cosy terraces under the arcades. The most notable building in the square is the 13th century Palazzo dei Priori. Opposite the facade is a large bronze statue of Pope Sixtus V, who was once bishop here in Fermo before being called to Rome to hold the papal office.

Today the Palazzo houses a small archaeological museum with finds from the time of the Piceni (9th to 3rd century BC). The building also houses the Pinacoteca Civica, which includes an ‘Adoration of the Shepherds’ by none other than Pieter Paul Rubens. Also impressive is the Sala del Mappamondo, a library with a globe from 1713 in the middle with a diameter of almost 2 meters. From here you also have a fantastic view of Piazza del Popolo! 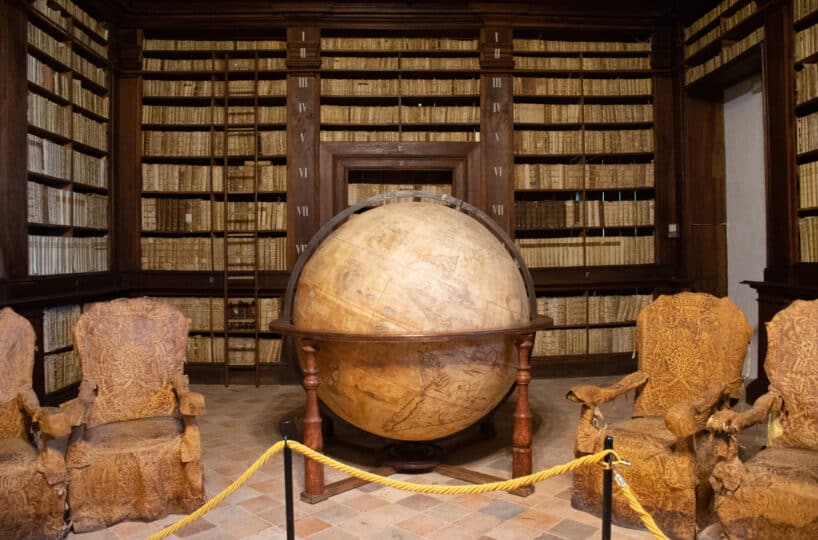 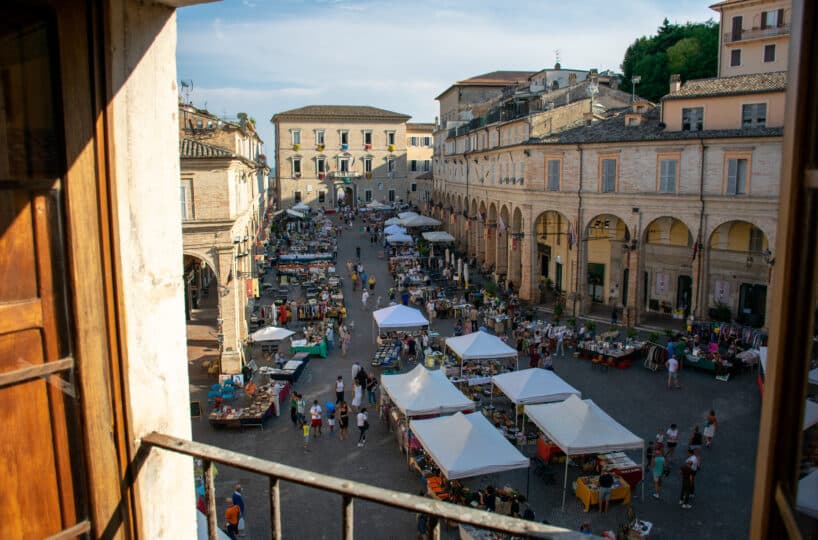 Diagonally opposite the Palazzo dei Priori is the Palazzo degli Studi with its striking yellow facade. The university that was founded in 1590 by Pope Boniface IX was once located here. Today it houses the city library which, in addition to a contemporary department, also has an impressive archive of old books and manuscripts. 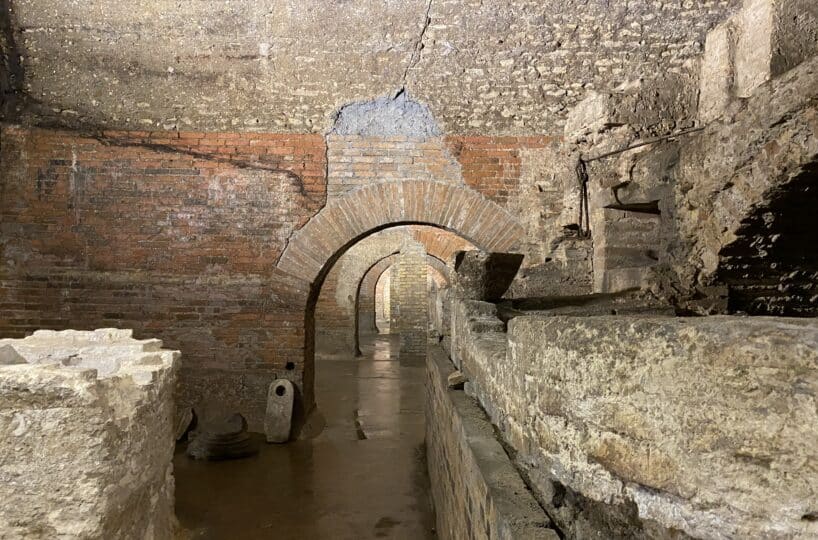 A still tangible testimony to the city’s Roman origins is the Cisterne Romane, an impressive underground water basin that supplied the perched city with potable water. The cisterne, also called purgatory or limestone pools, were realized to meet the water requirement of the city. This wide underground complex is datable to the end of the 1st century B.C. and is the largest in Italy. You can visit the well-preserved complex, consisting of 30 contiguous rooms. Benefit: when it the sun is shining outside and it gets too hot it is nice and cool underground! 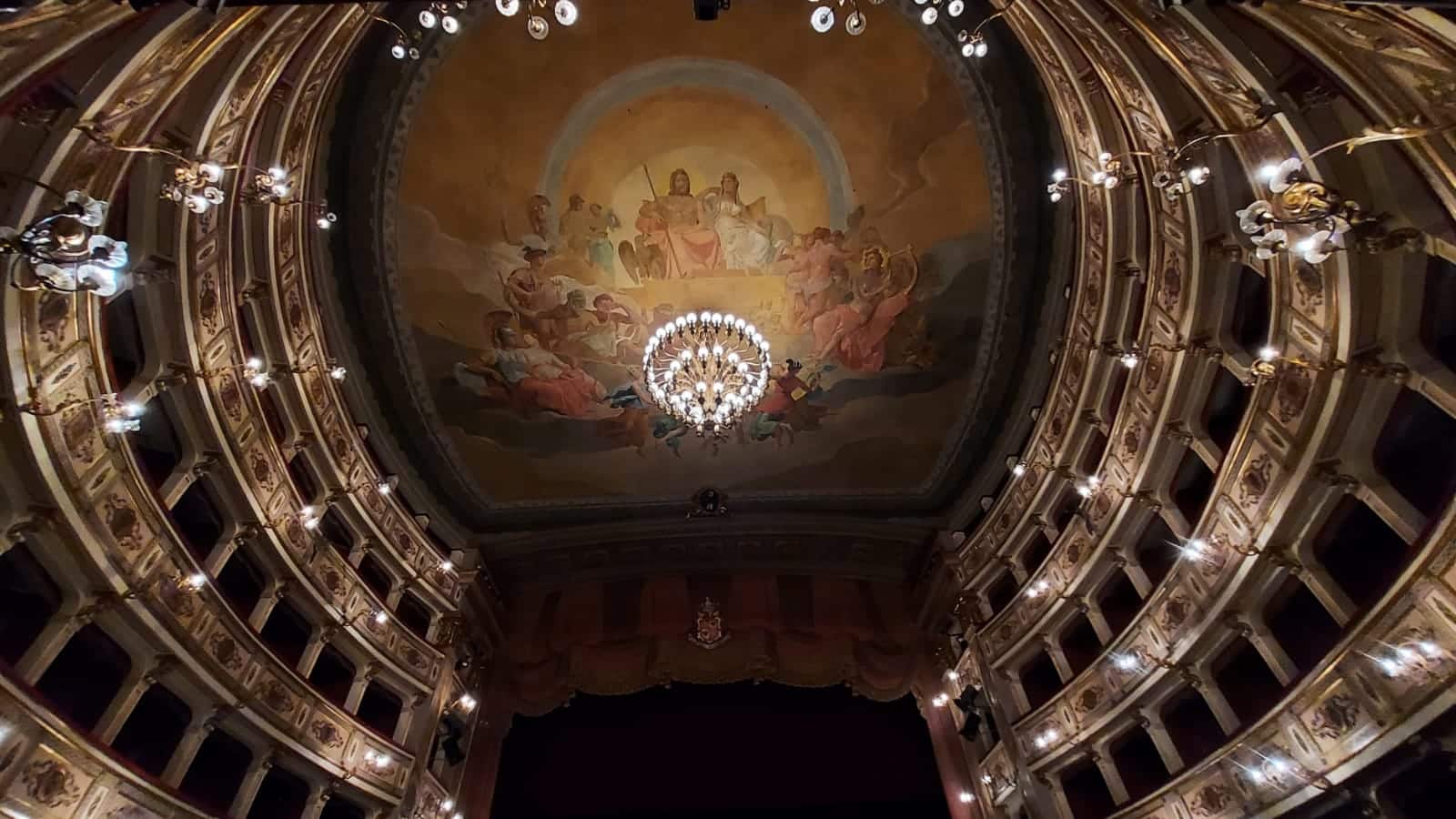 You need a guide to visit the beautiful Teatro dell’ Aquila. Dating back to the end of the 18th century, the theatre is the largest historic city theatre in the Marche region, larger even than that of major cities such as Ascoli Piceno and Pesaro. The theatre has 124 boxes spread over 5 floors. The 350 square meter stage and perfect acoustics make the Teatro dell’Aquila one of the most prestigious theatre halls in Italy. Most impressive is the painted ceiling depicting the Olympian gods Jupiter and Juno, who, along with the three Graces and six dancing figures, listen to the music of the god Apollo. You don’t really need to see a show there, because the theatre itself is a spectacle with its high balconies, decorated ceilings and chandeliers. But if you have the opportunity, go here and see an opera or other performance. The acoustics are sublime.

Leaving the theatre and continuing up the street, a short climb will take you to a tightly laid out, shady park. At the end of it is the majestic cathedral that towers over the city. The white, Romanesque-Gothic facade dates from 1277. However, the interior is in 18th century neoclassical style. Next to the cathedral is the Museo Diocesano where historical church treasures from all over the Diocese of Fermo are exhibited.

Practical: Tickets to visit the museums of the Palazzo dei Priori, the Cistern Romane and the Teatro dell’Aquila are on sale at the tourist office in Piazza del Popolo, next to the Palazzo dei Priori. A combination ticket for the three sights, including the guided tour of the Cisterne Romane and the Teatro dell’Aquila, costs €8. The ticket is valid for one year, if you can’t see everything at once. You can also buy the tickets online here.

Tip: It’s best to go on a Thursday when the summer market is held at Piazza del Popolo.

We concluded our visit with a fantastic dinner at l’Enoteca Bar a Vino. This restaurant is located inside a deconsecrated church. You need to book in advance as it can get quite busy during the summer. The enoteca only offers a set menu. We started with a delicious glass of bubbles and antipasti, all equally delicious! Then a primo, delicious secondo again accompanied by a very good glass of wine and concluded with a delicious dolce. We can only say that we really enjoyed both the food and the wines with a super atmosphere in the square. To book call +39 348 903 57. 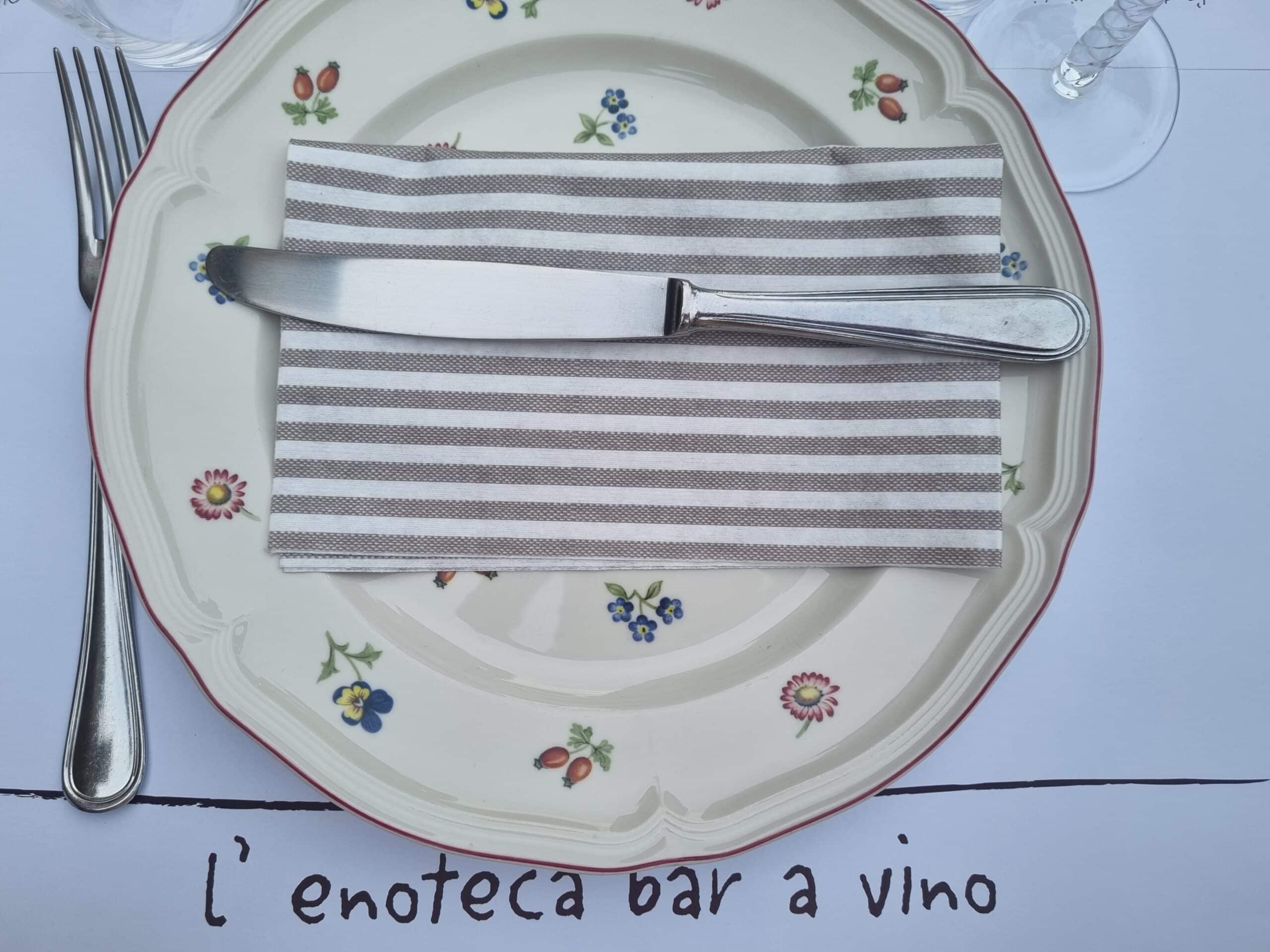 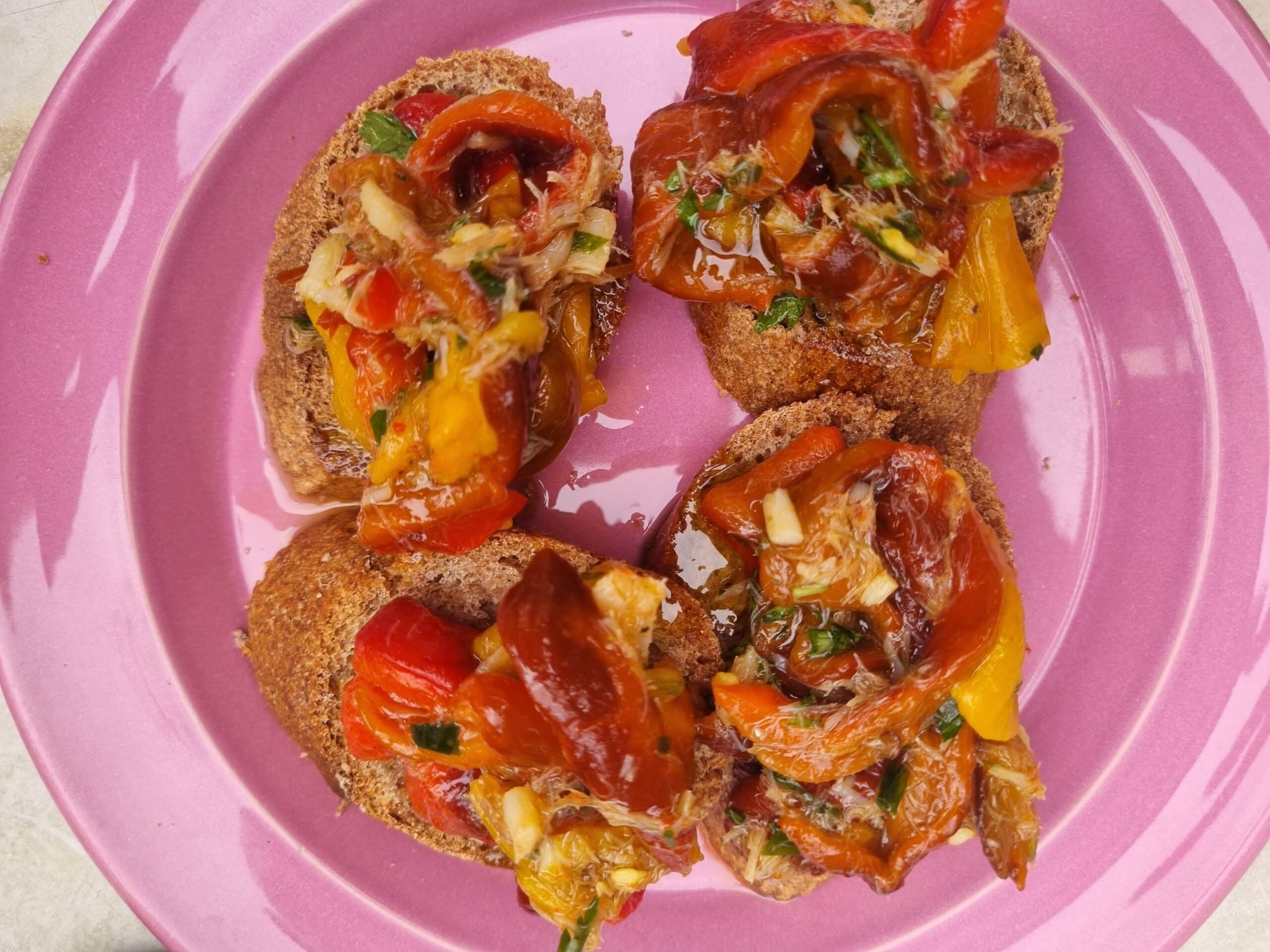 Tip: Park in Piazzale Conducci and take the elevator up to the city centre. 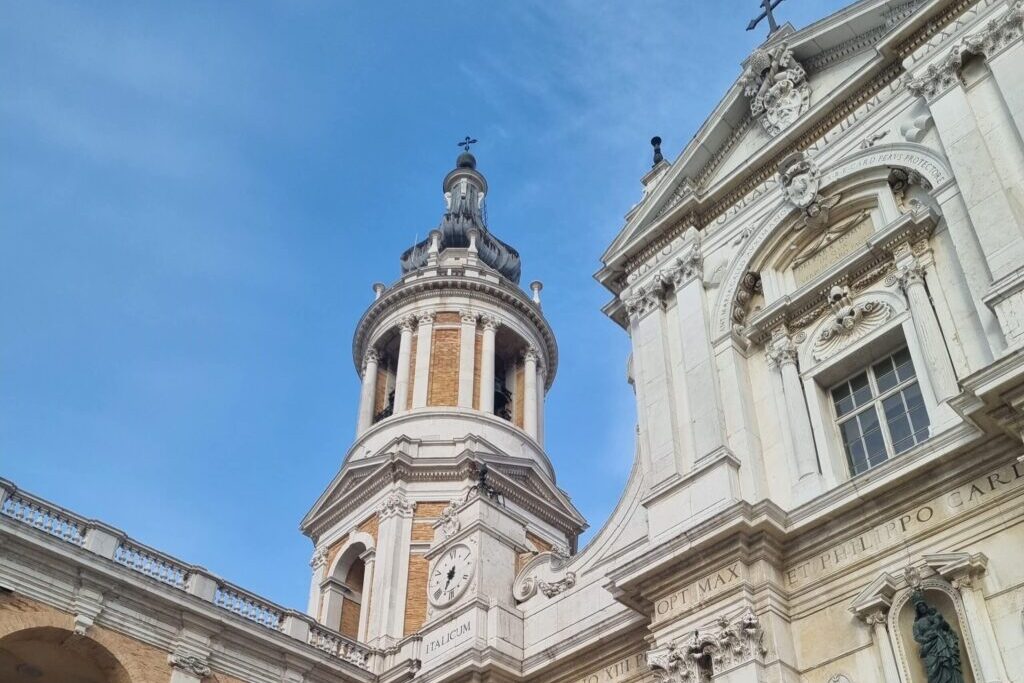 Loreto is located just south of the Riviera del Conero and is one of Italy’s most celebrated pilgrimage sites. However, even if you are not 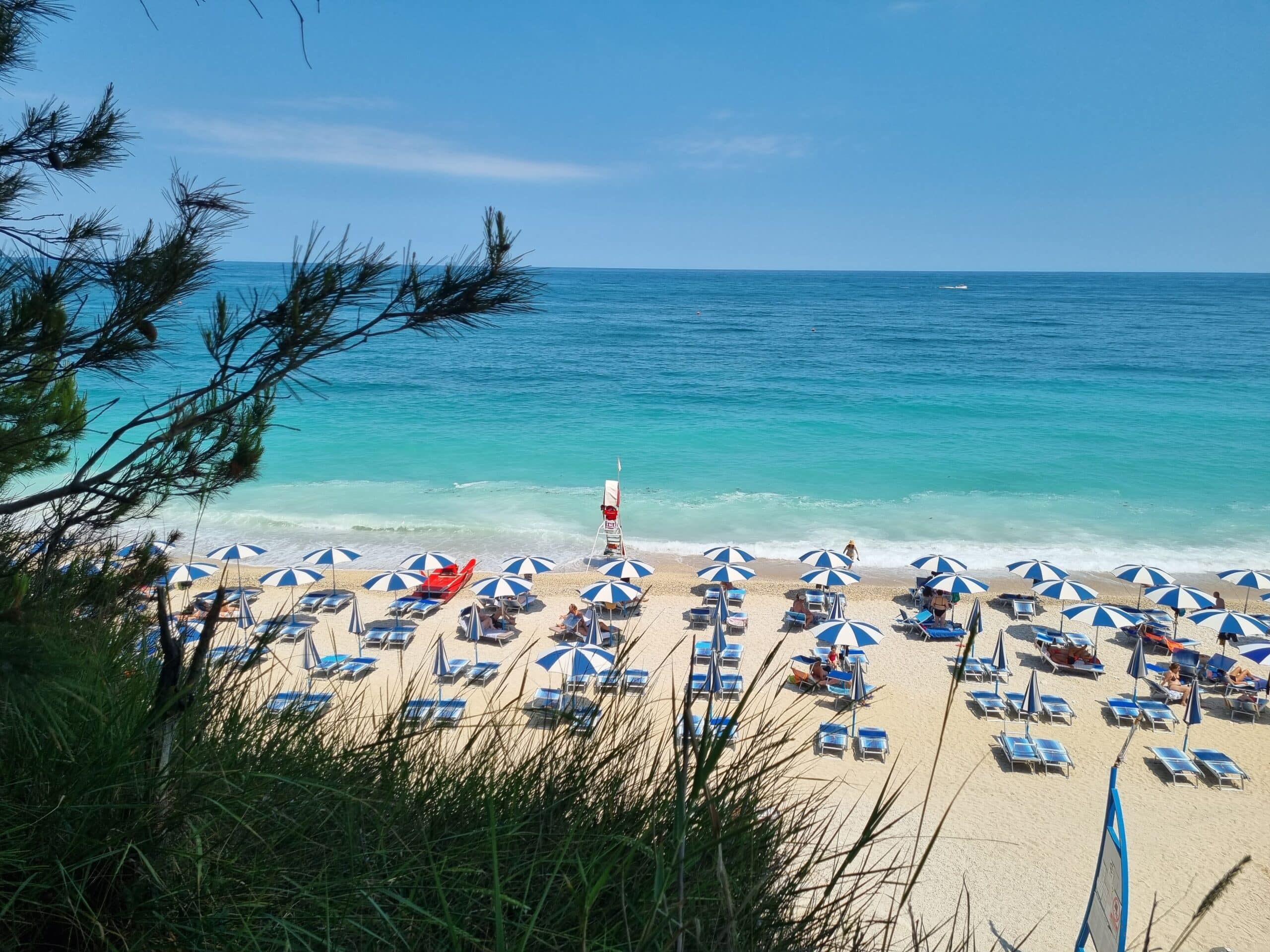 One of the most beautiful beaches in Le Marche: Spiaggia di San Michele

Spiaggia di San Michele near Sirolo is one of the most beautiful beaches in Le Marche. This beautiful long beach, sandwiched between crystal clear waters 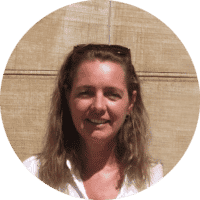 Ciao, my name is Monique!

I have been living in Le Marche for over 20 years with my husband and children. There are so many fun things to do in Le Marche!

In our blogs we will give you more information about nice restaurants, markets, being active and much more about what Le Marche has to offer!

Come and enjoy a wonderful holiday in Le Marche with Le Marche Explorer!

It takes less than a minute. If you already have an account login.

Enter your email address and we'll send you a link you can use to pick a new password.